Songs recorded all ended up on “Live at The Witch Trials”

From “Mother-Sister!” (Needs to be song/spoken in a MES voice)

It has to be “Rebellious Jukebox”. It has an iconic ring to it and became the go-to for many an 80s compilation. Top marks for the lack of space between the hyphen and use of exclamation marks in “Mother-Sisters!” though.

So this is where it all began.

I was 4 days short of my 11th birthday. I have no contemporaneous memory of the existence of the Fall or even John Peel. At school it was all the “Grease” and “Saturday Night Fever” soundtracks. Looking at the chart for that week, it was mostly a punk and new wave free zone. The highest place record that could be considered to be of that broad church was Ian Dury’s “What a Waste”.  I was definitely becoming a music fan though (and a Debbie Harry fan as were most boys my age probably) and there were a fair few things that had taken my fancy musically. “Because the Night” by Patti Smith stuck in my memory banks, years before I was even aware of Bruce Springsteen.  “Nice and Sleazy” was doing the rounds. I had thought that “Peaches” was the height of cheekiness a year earlier as a 10 year old, “Sleazy” was cut from a similar cloth.

Not a Fall fan though. Very few were, in fairness

They hadn’t released a single or an album at that point. “It’s the New Thing” was their first single (preceded by the “Bingo Master’s Break-out” EP) and that was still three months away from being recorded. The debut LP “Live at the Witch Trials” (neither live or recorded at witch trials) was still a twinkle in their eye, six months away.

Given that this was so early on the band’s career, it is no surprise that the session is rather raw. It already sounds unique to the band, even though it is not a huge development of the early punk and new wave music that was around from ’75 and ’76 onwards. The Clash were already on to “(White Man) in Hammersmith Palais”. Siouxsie and the Banshees were about to record “Hong Kong Garden”. By comparison, this first Peel session still feels somewhat DIY. 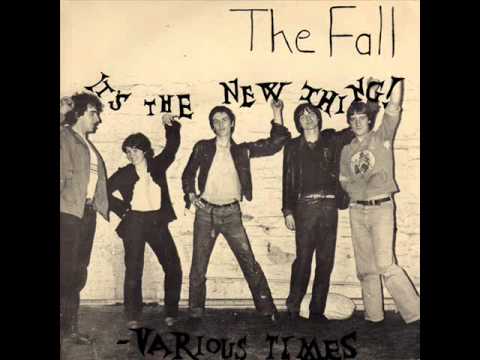 All four songs recorded found their way on the first album. Of the four, the two that I am familiar with now are “Rebellious Jukebox” and “Industrial Estate”.

The latter was an entry point to the Fall for me. In 1986, Channel 4 broadcast a superb compilation of Granada recorded Tony Wilson fronted New Wave footage. A youthful Fall got a brief spot. I managed to get the show on VHS at the time and it helped build on the enjoyment of the Brix era albums that I was then listening to.

It may have been growing up in the industrial Black Country seeing factories close as the Thatcher years took hold but this song resonated with me then and still does now. It is uniquely direct in the Fall’s repertoire and gives a hint of what Mark E Smith was trying to get away from. It expresses his disillusion with his lot in the north west and serves as a unmusical calling card.

Well you started here to earn your pay

Clean neck and ears on your first day

Well we tap one another as you walk in the gate

It is sobering stuff and enough to put your average literate intelligent Mancunian on a musical path. The Peel session version starts with a cacophony of guitar harmonics and then we are into Smith’s condemnation of his job opportunities. If anything it is slightly less angry than the “Witch Trials” version. Perhaps he was getting more used to the recording studio environment in December and more confident in expressing his anger.

In terms of the personnel, Martin Bramah played both bass and guitar as the regular base player, the brilliantly named Eric Ferret (regular name Eric McGann) refused to travel to the Maida Vale studios as he objected to Davis’s congas being in the back of the van. It seems a bit of wasted show of pique if you ask me, as the session seemed a conga free zone listening back to it, Karl Burns providing the propulsion.

It is Burns that drives on the opening “Futures and Pasts” (“I understand but I don’t see it”), a right old boogie with a one finger keyboard riff. The sessions version is a richer version that the Witch Trials number but the band there isn’t much development of the tune. The keyboard player may be using two fingers.

“Mother-Sister!” doesn’t grab me on first listenings but one can definitely hear what clicked with “Rebellious Jukebox” which appears to be about Smith putting something unappreciated and unpopular on the jukebox in his local Prestwich boozer and subsequently clearing the joint. (“Drinkers from the slaughterhouse, Weren’t happy and went out, Noise resounds aloud, Noise resounds the lounge“)

The session was a year into the band’s existence and just 23 days after Peel’s sidekick producer had seen them supporting the Banshees in Croydon, having been tipped the wink by Danny Baker.

Having seen the band, Walters approached them with the following offer:

It was the start of a beautiful friendship.