Gil Scott-Heron was one of our musical heroes growing up. My mate Daz religiously hunted down all of his LPs, which was hard work in the pre-internet easy pickings on Ebay and Discogs days. I had a fantastic double CD compilation of his work that I regularly still listen to. “The Bottle” was always a guaranteed staple tune when I was out clubbing in Liverpool at the Mardi Gras, McMillan’s or the State.

And then we got chance to see him live at the relatively short lived venue that was Ronnie Scott’s in Birmingham. My recollection of the evening was that Gil wasn’t on fantastic form but it was still worth the trip into Brum on a Sunday night. The venue didn’t stick around for long. The idea of residencies for jazz musicians (four nights of Elvin Jones anyone) wasn’t sustainable away from London. 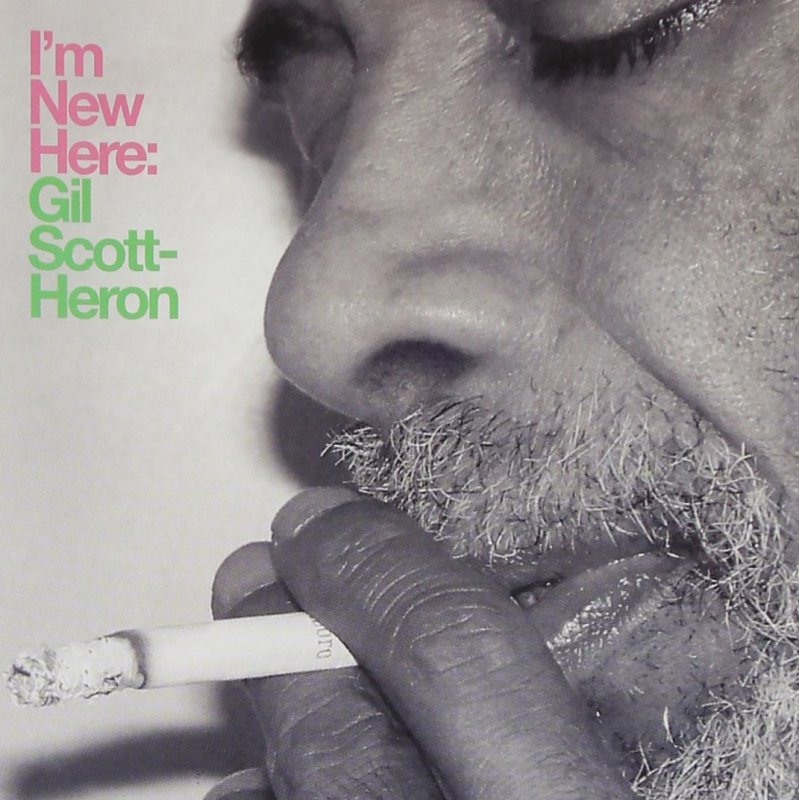 Gil died in 2011, just 62 years old. No doubt years of substance abuse and illness ravaged him and periods in prison for drug possession didn’t help probably either. The incarceration for drug possession seemed particularly archaic and politically motivated. He was just getting active again though, with the short, sharp and to the point “I’m New Here” album being released in 2010, followed by a remix version by Jamie XX. The album wasn’t quite up there with his seventies output but it did show that he had something to say. Let’s face it when – Gil had something to say, it was always worth listening. The bonus CD had a stripped back version of “Winter In America” and the title track was a cover of a Bill Callahan tune, again one of my favourite singers.

The Roundhouse hosted a night of Gil’s music. It was put together by Dave Okumu of the Invisble. The venue was by no means packed but it was one of the most diverse crowds that I’d seen in a while, illustrating the boundaries that Gil’s music crossed. Okumu’s house band included Sam Shepherd aka my current Floating Points. I blogged about their fantastic album here and a memorable show here. The house band were a constant through the show and the singers and poets were perched on a couple of large sofas at the side of the stage. This was a really clever touch, creating a sense of intimacy and involvement plus it kept the show moving along at a decent rattle, avoiding those embarrassing pauses for these large ensemble evenings when the next singer has gone to the toilet or the wrong artist arrives on stage. I saw a Lee Scratch Perry evening that was about 30 minutes of long reggae jams and an hour of hanging around.

The first highlight was Kwabs’ “Home Is Where The Hatred Is”. He’s a young singer of Ghanaian parentage. He confidently owned the stage with a very rich voice and brought a wonderful saxophone solo from Jason Yarde. Joan As Policewoman’s first contribution was a solo version of “Running” from his final album, which she played solo at a keyboard and gave it a Leonard Cohen like gravitas.

Spoken word was a big part of Gil’s skills. There were three examples and all were tremendous. Reginald D Hunter provided an incendiary version of “The Revolution Will Not Be Televised” delivered with the same fervour as Chuck D. Solomon O.B. provided a counterpoint with a marvellous poem suggesting that the “Revolution will not be televised but it might be Youtubed”. Kate Tempest provided an equally fired up version of “Europe Is Lost,” an expensive ten minute free flowing diatribe against the 21st century world.

Maybe poetry is where the protest is now. I’m not sure where Gil’s musical successors are but do the poets have his lyricism and musicality combined with his social truths? Certainly for all of their potential as influencers, the likes of Kanye and Jay-z are falling short and the jury’s still out on Kendrick Lamar for me. 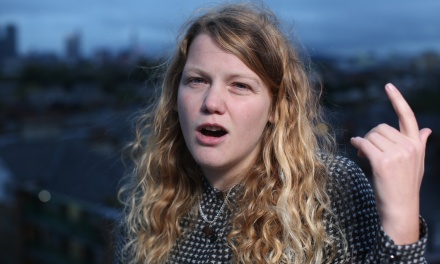 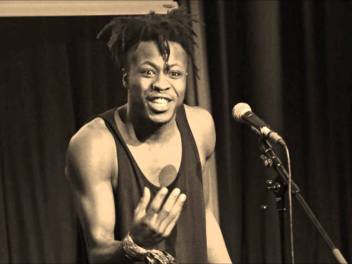 Back to the evening though. “Whitey’s On The Moon” by Loyle Carner was fantastic, a young man going back in time to black Americans were watching the moonshots whilst struggling to put food on the table and getting nothing back for their rent and taxes.

Two of the best and most divergent performances were from two of the female singers. Anna Calvi brought her guitar chops to “Me And The Devil”, Robert Johnson meeting “Mezzanine” era Massive Attack. The killer performance of the evening though was Nadine Shah’s take on “I’ll Take Care Of You”. The song was written by Brook Benton and until now my favourite version was Mark Lanegan’s. But Shah’s version was incredible. Dressed head to toe elegantly in black, she possessed the song adding danger, intensity and mystery. It brought the house to its feet.

Much of Gil’s canon got an airing – “The Bottle”, “Lady Day and John Coltrane”, “Almost Lost Detroit.” The band were excellent, flexible and varied and all facets of Gil’s talents were featured.

Rather sadly though the evening still felt relevant but many of the wrong reasons: the rise of the political right (both in the USA and beyond), the disenchantment with the political left, gun crime, violence against blacks by the police and others in the USA. The world in 2016 is a scary place and having a few more around like Gil to make sense of it would be wonderful.

Ultimately though, Gil Scott-Heron was a true original as my friend Mark has said. Tonight, that was recognised and tribute was justly paid.

And you can’t say fairer than that.

For anyone interested, here’s a couple of extracts from the flyers with background information on the evening and who sang which songs. 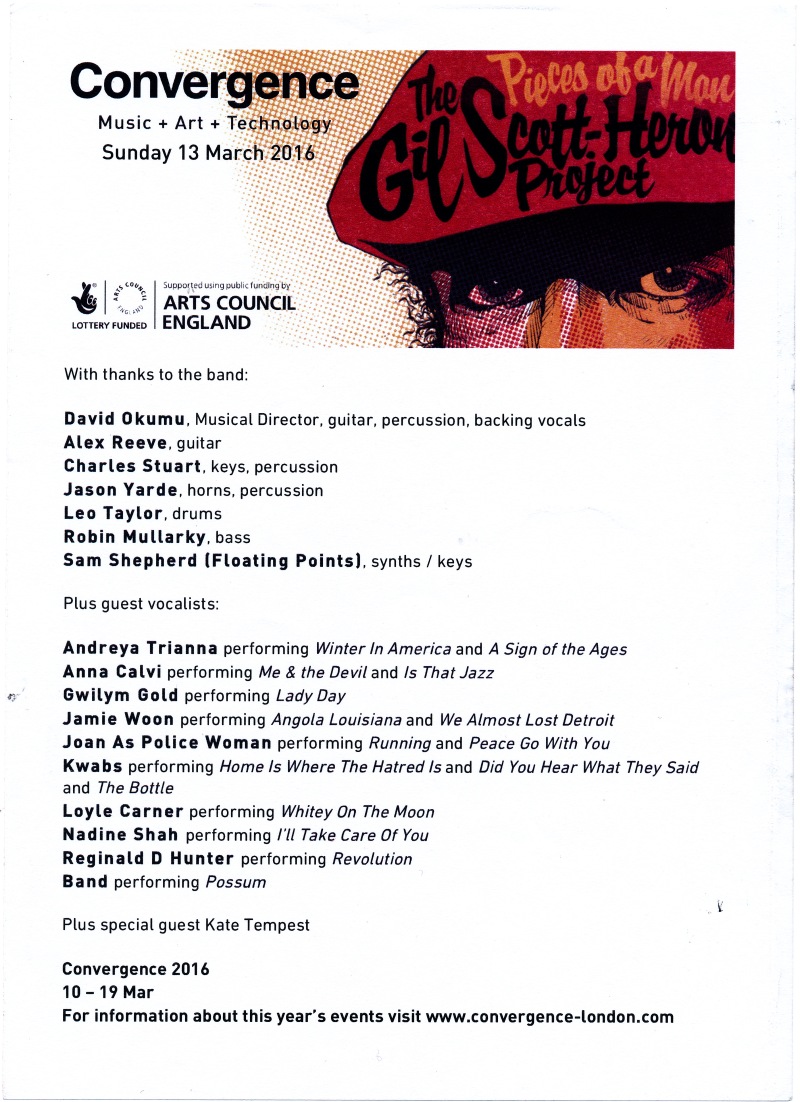