I’ve been loving my favourite audio shop for the last couple of weekends in particular.

Soundstage in Cockfosters have treated me well in recent times, helping me upgrade my speakers (KEF), CD player and amp (both Arcam). However to use the modern parlance, they’ve taken it to the next level.

On Saturday 9 July, they hosted a special in-store vinyl day showing off their new reference system. And man, what a system.

A combination of the Rega RP10 deck with the Naim amplifiers and the B&W speakers added up to a £50k drop. There are perhaps prettier systems out there (such as the Linn Timorous Beasties speakers featured in the ) or some with more of a retro appeal. In terms of sound, this set-up would take some beating. Soundstage have blogged about it themselves here.

I took a couple of albums along for the day. The wonderful Floating Points LP from last year sounded terrific but the showstopper was Art Blakey’s “Moanin'” from 1958 on Blue Note. There was a queue of people in the shop so we got one track each and I went for the title track. “Moanin'” is a call and response number with the composer, Bobby Timmons, leading the band on piano, with Lee Morgan and Benny Golson responding the horns. It switches next time with the horns leading and the piano responding. We’re back to the piano again before Blakey hits the kit with a crescendo and the solos start, with the whole band getting a shot at the spotlight.

I came back the following week with my eleven year old daughter in tow, a willing accomplice. We took along some family favourites – her Taylor Swift LPs, “Ziggy Stardust” and “AM” by the Arctic Monkeys. “Starman” sounded phenomenal, her favourite Bowie track, not least because of the flashmob at Glastonbury and the use of the song in the excellent Matt Damon movie, “The Martian”.

We finished off with another Blue Note track, “Chitlins Con Carne” by Kenny Burrell. It’s the opening track on the “Midnight Blue” LP and was simply stunning.

The track has a blues feel but a latin tempo. The drums and the bass play the opening bar but it is when Ray Barretto’s bongos come in that it really kicks off. With the bass on the right hand side and Burrell’s bluesy guitar on the left hand side, you are transported into the heart of the performance.

Both LPs were engineered by Rudy Van Gelder at his in house studio in Hackensack. RVG was an optometrist by trade and a radio ham by hobby but was also a jazz fan who had set up a recording studio in his living room.  He was a master of his craft. Alfred Lion, who was one of the founders of Blue Note, took saxophonist Gil Melle’s recording to his usual engineer in New York. RVG recalls:

At that time, Alfred was going to a radio studio in New York, WOR studios……So that’s where Alfred went and he took album to the engineer there and he said, “I want it to sound like this.” So the engineer listened to it and and told Alfred, “Look, I can’t make it sound like that, you better go to the guy that did it.”

Rudy got the Blue Note gig and has engineered and re-mastered countless jazz LPs. He’s still alive at the time of writing, aged 91.

We played the Kenny Burrell track through and I said to my daughter that she could chose one more for the road. Her response was “can we leave this LP on and listen to the next track!”. No complaints from me.

After we had finished listening, we started talking to Dean and Ed from Soundstage. The first observation was how involving the system was. Neither of us reached for our mobile phones, we just sat on the sofa and listened, total engagement. We then got to commenting on how, growing up in the seventies and eighties, people tended to have music centres in their home. They may have been in mahogany cabinets like this: 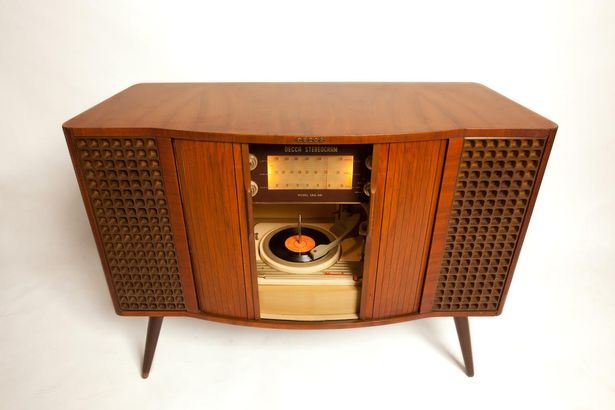 Or stacking systems in glass fronted units like this:

But they were there. Nowadays, one doesn’t see the music centre play the same central part in the living room. Yes I understand that they have become more compact and can be integrated into smart TV’s, computers or streaming systems. It is ironic though that despite the range of music available becoming wide beyond my wildest dreams via Spotify and other streaming systems, the quality of the systems reproducing the sounds have decreased. The current fetish for vinyl may be an influencing factor in an improvement but hifi seems to now be a poor relation to widescreen TVs.

Another observation is that all of the kit listed above that Soundstage demoed or have flogged me is British owned and most of it is British manufactured. The UK excels at designing and making decent hifi.

I love what I have spent my hard-earned dosh on. I’m finding that my bedtime routine is being affected as the family go to bed and I listen to “just one more” track before turning it. There has been many a recent night when I’ve looked at my watch to find that the early hours of the morning are approaching.

So if you can spare the space in your living room, treat yourself to a decent music system. It doesn’t have to be vinyl-centric – you can rig a streamer or CD player up to an amp and speakers. But I’m convinced that it will pay dividends. It will push music from the background to the foreground. And you may be helping our post-Brexit referendum economy by buying British.