As readers may recall, Ryan Adams holds a bit of a special place in my heart. “Heartbreaker” is one of the most treasured LPs in our house. I wrote about last year’s bumper reissue here. But it has been a while since I’ve been excited about a new album by the boy. Ryan is a prolific artist and occasionally his quality control goes a bit awry. No bad albums per se but some aren’t consistently good.

However it feels like his version of Taylor Swift’s “1989” was like a palate cleanser. My daughter is a huge Taylor fan, we went to see her in Hyde Park in 2015 (reviewed here) and, to my surprise, I thoroughly enjoyed it. Consequently I’ve got a big soft spot for “1989”. Ryan’s attempt at it revealed further the already evident songcraft in the original, scraping away the sheen and adding a little bit of grit. The version of “Blank Space” is a particular favourite, gentle and acoustic, whilst “Shake It Off” is toned down, reduced to a close cousin of Bruce Springsteen’s “I’m On Fire” with a simple rimshot backbeat and works brilliantly as such.

Ryan is now much more of a visible presence. His Instagram account is worth a follow and it has shown the slow build up to the release of “Prisoner”. Whether it was the long slow burn or the quality of the early tracks I’ve heard but that old sense of excitement is back, probably the first time in a good ten years that I’ve felt this way about one of his LP’s. I genuinely wanted to hear the album, hoping that it marked another high watermark in Ryan’s extensive back catalogue.

In the run up to “Prisoner” being released, Ryan visited the UK. In between impromptu pop up gigs, he headed up to Salford, tried to perform at the iconic Lad’s Club, had his gig scuppered by a boxing event and ended up in a rather gentle interview on the BBC Breakfast sofa.

A couple of observations: firstly that the BBC interview, if a bit of fluff, does show a more mature Ryan with less goofing. Whether it is the passage of time or his divorce from Mandy Moore, there is a perception that Ryan is taking things a bit more seriously.

Secondly, Ryan has been building up the Smiths connection for this LP. He has often said that “Meat Is Murder” is his favourite LP and he has covered “The Headmaster Ritual”.

Up to now, his output has been paying a more subtle nod to the Manchester band but “Prisoner” places the Smiths at the forefront of the influences. The debt is more overt. The title track  and “Anything I Say To You Know” have the lush multi-layered arpeggiated guitar sound of prime era Smiths which is prevalent across the LP. “Doomsday” has a rasping harmonica introduction, bringing to mind “Still Ill”. Ryan has long been a classicist, whether it is more commonly referencing country rock (“Cold Rose”), 80s radio rock (“Rock And Roll”) or college rock (“Love Is Hell”). He even recorded a song for song version of the Strokes “Is This It”. Here though, the influences feel more enmeshed in the music, rather than intellectual or artistic parlour games.

“Prisoner” is more rounded with a higher quality benchmark. The opening track and lead off single “Do You Still Love Me” works as a eighties power ballad, like an update of the original version of Whitesnake’s “Here I Go Again”, complete with a very rock’n’roll guitar solo. Don’t let that put you off – it really is one of the most catchy and immediate songs Ryan has put out in a while.

The other obvious reference point is another of the all time great break up albums, Bruce Springsteen’s “Tunnel Of Love”. “Haunted House” would sit comfortably alongside the tales of a musician’s relationship gone bad, such “One Step Up”, “Two Faces” or “Brilliant Disguise”. “Tightrope” features a gorgeous sax solo that the Big Man himself would be proud of. It’s got some swelling 80s keyboard motifs throughout and does represent a progression.

In fairness to Ryan, lyrically too this is way beyond “Heartbreaker’s” self absorbed and mopy low point “Why Do They Leave”. This is mature and serious stuff and deals with the dissolution of a marriage.

It’s so hard to be without you
Everyday I find another little thread of silver
Waiting for me when I wake some place on the pillow
And then I see the empty space beside me and remember
I feel empty, I feel tired, I feel worn
Nothing really matters anymore (“To Be With You”)

One of the acoustic gigs that Ryan performed on his UK promo tour was at Rough Trade East, where he did a gentle cover of Springsteen’s “Philadelphia”.

Whilst there, he was interviewed for their podcast taking an hour to discuss his favourite music. Tellingly, it was all alternative rock from the 80s and 90s. It is a fun hour to hear Ryan engaged and talking with affection about his youth and his plans for the future, especially his mega box set edition of “Prisoner”, which includes 7″ coloured vinyl versions of the tracks, all with non-album B-sides. Again, this another nod in the Smiths direction, paying homage to their habit of releasing singles such as “Panic” and “Shakespeare’s Sister” outside of their cycle of LP releases.

Here’s a few shots of the box set contents, retailing at almost £200. There are a few  potential “Easter Eggs” in the box, in the shape of one off 7″ singles recorded by Jack White’s mobile straight to vinyl recording machine. These are literally unique, there is only one of each recording and do not exist in any other format. Keep an eye on eBay for those of you with deep pockets! 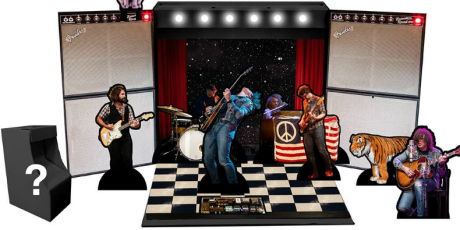 This is the most committed that we’ve heard Ryan in a long time, both musically and personally. He isn’t out to sabotage this record or wilfully ignore its existence. He is embracing “Prisoner”, which subtly weaves the Mancunian influence into his existing American template. He’s playing the UK in September. I may well give it a go.

May be it isn’t a bright new dawn for Ryan, but in the meantime it is a record that skilfully moves him gently in a different direction, albeit we aren’t talking drum’n’bass, techno or dubstep.

It is an enthusiastic Ryan Adams LP and I’ll take that for now.

Ryan’s favourite albums (with his chosen tracks from each LP) were as follows:

Like me, Ryan was drawn to SY by the name but also by just how damned cool Kim Gordon looked (I wrote about Kim’s autobiography here).

It’s a slow powerful track from the band that gave Boris their name.

One of my favourite and most underrated bands. I’ve seen them give some stunning shows, which no doubt will be the subject of a blog post in future days.

I saw Dinosaur Jr perform the LP in full at Ally Pally a few years ago. Another personal favourite of mine.

Not one of my favourite Cure LPs, but the one that broke them big in the USA.

I’ve popped the link to the Rough Trade podcast below.