I’ve seen John Grant four times now. First time around, he was with Midlake at the Royal Festival Hall, smoothing out the softer rocky bumps of his debut album. I’ve enjoyed Festival Grant at Glastonbury, with Budgie on drums playing a condensed punchy set. Late last year, we were at the Barbican for the Rough Trade 40th celebrations, where we had Electro Grant, playing an experimental set with Wrangler.

This was a very special evening. Essentially a chamber performance in the wonderfully intimate Union Chapel, a stone’s throw away from Highbury Corner, we were here to help raise money for Grant’s good friend Oleg Semenko. Oleg was a Ukranian serving as a Russian soldier, with whom Grant established a long distant relationship after meeting whilst Grant was a student in East Germany, in the days before re-reunification. He is now very ill and unsurprisingly, he is not receiving the healthcare one would hope from the Ukranian state.

I’ll let Grant pick up the story in his own inimitable way:

Oleg and I met in in 1988, in Weimar in the former DDR. He was in the Red Army and I was with my classmates from the Junior Year in Heidelberg progam and we met him and a bunch of other soldiers while visiting the various sights of the city.

I had just started studying Russian at the University of Heidelberg and Oleg seemed to be the leader of his pack. He was very jolly and kind and we exchanged addresses as I attempted to communicate with my very new and elementary Russian skills. For three years after that we wrote letters back and forth. His were always in Russian, mine were a mixture of Russian and English.

In 1991, I received an invitation to visit him and his family in the town of Chernigov, now Chernihiv, in northern Ukraine. I stayed with him for six weeks and he and his family took care of me and helped me with my Russian and I would often read Russian poetry with Oleg’s father, Viktor in one of the beautiful parks in Chernihiv. It was an amazing and mind-blowing experience for a kid from a small town in Michigan. Oleg and I developed a deep friendship and I ended up going back the next year to visit again. I was going to school in Germany at the time. In 1994, I left Germany and went back to the States and in 1995, my mother died of lung cancer and that incident and everyday life in general resulted in my contact with Oleg becoming sparser and sparser until we at some point completely lost contact to one another.

Cut to over 20 years later, Oleg finds me on Facebook. I was overjoyed because I had been looking for him as well and could not find him or his letters, which I later found buried in my things in the basement of my brother’s house. We spent months catching up and the news from his end wasn’t so good. He had developed Glomerulonephritis which had led to kidney failure. When he first went to the hospital in Chernihiv, he was actually infected with Hepatitis C IN the hospital which of course made things even worse. In meantime, his father Viktor, who was on the clean-up crew in Chernobyl had had three attacks, the last one of which took his life. That left Oleg and his mother to fend for themselves on their tiny pension which amounts to approximately 100 dollars a month. Oleg has been on dialysis for over ten years now and the prognosis is not good currently. I just arrived back in the Ukraine, where I am now writing this, a few days ago after 25 years, to see Oleg and his mother, who also recently suffered a heart attack.

They have never asked me for anything and make do with occasional help from friends which enables them to keep some food on the table. Jobs are scarce in Chernihiv even for those are not sick or disabled. Oleg has an old computer from his healthier days with which he is able to earn a bit of money on the side doing various writing jobs on the internet. It’s a bleak situation. There are laws in the Ukraine which prohibit people from receiving transplants from non-family members and so Oleg’s only chance is to get to Belorussia where kidney transplants are actually available and where he can be put on a waiting list. This will cost anywhere from 60-80,000. All of the costs for this would have be out of pocket for him, so he currently cannot see any hope for change and is basically sitting around, waiting to die.

I want to change this for him. Oleg and his family were always incredible to me and after reconnecting with him, I feel I MUST do something to try and help him and his mother get some relief from the years of poverty and sickness they have endured. I do what I can personally of course, but it’s not enough.

We picked up the tickets in a lottery and joined the expectant queue. JG had hotfooted it down from Hull, having curated a festival as part of the City of Culture season. With just a small drummer-less combo of keyboards, guitar and backing vocal/musical saw, the Union Chapel gig was staged as a fundraising event for Oleg and focused by design on the more intimate, less funky aspects of Grant’s catalogue. There was no “Disappointed”, “Chicken Bones”, “Snug Slacks” or even “Pale Green Ghosts” this evening. This was straight down the line balladry and it exposed the heart and wit that sit at the centre of his repertoire.

Opening with “TC And Honeybear”, Grant was joined by C4 newsreader Jon Snow’s favourite, Mara Carlyle. Her 2011 album “Floreat” was a Rough Trade Album of The Month with a “Bowlface En Provence” a particular highlight of mine. Carlyle provided a crystalline ethereal vocal accompaniment on occasions through the evening, as well as a Sonny and Cher style duet with Grant on “You Don’t Have To”.

Whilst the subject matter can be grim (death, disease, aging), there is a constant seam of self deprecating humour. Yes, he can be pompous (think Frasier Crane) but as he said last night, he pulls himself up on it. The title track from his third album “Grey Tickles Black Pressure” is a perfect example of this. It opens with one of the most accurate accounts of male middle age:

Before we get too wrapped up in Grant’s depression at the passage of time, he disarms us with the chorus:

This is a recurring trick and in the quiet surroundings of the Chapel with every word and syllable audible and there to be savoured. Whilst Grant is clearly skilled at playing the piano man, his lyrics and his rich voice elevate the evening and take us into his world and all of the love, life and regrets that populate it. His fellow musicians gave him the space to perform, switching instruments constantly. The humour in Grant’s lyrics shines through including his skilful use of metaphors and similes, such as an ice flow cutting through a landscape as a metaphor for pain (“Glacier”) or comparing a toxic personality to Agent Orange (“Vietnam”).

This generated a whole lot of love for Grant and by proxy for his friend Oleg. The evening started with JG asking for members of the audience to film a message from him to Oleg in Russian. As demonstrated on the recent Rough Trade podcast, Grant is a linguistic polymath and his greeting was delivered in a very impressive Russian baritone.

All involved in the concert gave their time for free, there were collection buckets and pencil prints of Oleg and JG available to buy. Hopefully this will get closer to the money that Oleg needs. JG is now taking a break before starting his next album.  His autobiography is in production too, which I am sure will be an excellent read.

Here’s a performance of the wonderful “Caramel”, a love song from his debut LP:

You can contribute here and if Grant comes to a town near you, take advantage.

Also if anyone wants to enjoy an hour in JG’s company, this Rough Trade podcast is fascinating, especially the first twenty minutes where he talks about his love of language. 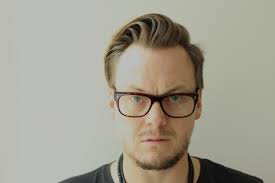 The support was provided by Johnny Vic aka Satellites. The second Satellites LP “0.2” was also a Rough Trade album of the month, although I never quite took to it. His half hour set was a very clever bedroom symphony with most of the set being comprised of Vic backing himself. I must confess that it didn’t move me tremendously but I can see the skill and appeal.