Once in a while a record comes along that unites our household, teenagers and aged parents combined. They are generally LPs that have enough songcraft, quality and depth to draw the adults in with enough immediacy, coolness and star quality to appeal to my daughter. Recent examples include the Arctic Monkeys “A.M.”, Beyonce’s “Lemonade” and Taylor Swift’s “1989”. 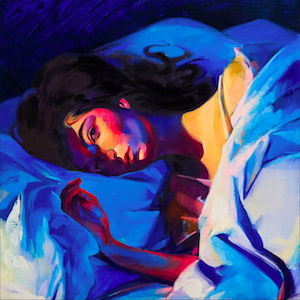 The last example is telling. Lorde’s “Melodrama” was released earlier in the year. It heavily involves Jack Antonoff, who also was a significant contributor to Swift’s “1989”. The album is witty and literate. There is a tinge of the self absorption of Alanis Morrisette’s “Jagged Little Pill” but enough humour to avoid the sort of commentary made by Rob Brydon and Steve Coogan on Alanis’s LP on the Trip to Italy.

Aside from the melodic strength and the stunning musical dynamics on “Melodrama”, there is some stunningly clever lyric writing. Take your pick: “I’ll love you til you call the cops on me from “Writer In The Dark” is particularly appealing given the unhinged vocal delivery. My favourite is “The Louvre”:

They’ll hang us in the Louvre, down the back but who cares, still the Louvre

The song may just be the most perfect pop hit of the year. The song captures the against the odds teenage love in the most endearing manner. The distinct verse and chorus structures are incredibly skilled. The clipped guitar introduction lulls you into thinking this is a simple power pop number until the huge chorus and the denouement of the post chorus (“Broadcast the boom, boom, boom and make them all dance to it“) sends the song spinning away. The “Born To Run” outro guitar riff snags the classic rock crowd.

And there’s the other skill of the album. Whilst it sounds of this era with its post rave build up to “Green Light”, it also draws on the sonics of other eras and in particular the drum sound and the use of gated reverb subconsciously pushes the aural buttons of this fifty year old. I love this particular video which is very very nerdy.

I know people talk about smell being the sense that most evocatively triggers memory but this is an example of where the nature of sound sends the years flying by. There are other triggers to the rock canon. The chord structure from “Liability” is a take on David Bowie’s “All The Young Dudes”. Bowie expressed his admiration for Lorde and this feels like another nod from Lorde back to Bowie, especially after her stunning take on “Life On Mars” at the 2016 Brit awards just after DB died. This was my first exposure to Lorde and I was stunned by the maturity with which she delivered a melodically tricky song in a high stakes environment.

Her performance at Alexandra Palace was extraordinary when considered in the context of her relative youth as a 21 year old with only two LPs of material. Few artists of her brief career would have had the repertoire to keep going for almost two hours. There were a couple of costume changes and a lengthy emotional monologue at the start of “Liability” that allowed her to catch her breath. Beyond these brief interludes though, it was an energetic and joyful performance that maintained the momentum.

Lorde continued the monologues during the show that were part of her performance at Glastonbury. I can really see her appeal to her youthful audience. She articulates perfectly what it is to be a disenfranchised teenager/young adult aware of their inadequacies and desires, however self destructive or dangerous they are. For other artists this may feel like schtick, an exploitation of their callow audience’s vulnerabilities. With Lorde, it doesn’t feel manipulative. There is a refreshing honesty. I can understand youngsters buying into her world. She speaks to and of their world, of escaping lives, unachievable consumerist aspirations and the age old songwriting thread, looking for love.

Her meteoric rise has been extraordinary and her advocates such as David Bowie add to her credibility. Without the talent to back it up, she could have a long way to fall.

She needn’t worry though. The energy levels were significant but this wasn’t just   musical athleticism for the sake of it, irrelevant in terms of entertainment. Lorde is a confident performer, absorbed enough in her own world to be true to herself but sufficiently self aware to know that she can’t shut out her audience. She treads the fine line with aplomb. She makes up for the intensity during the songs by communicating easily with her fans when the music stops, chatting about her joy at being on stage and proclaiming her love for all. It may sound a little icky but it is heartfelt enough to be convincing and doesn’t grate.

The overriding virtue that shone through was the sheer quality of Lorde’s performance. This is an artist that is destined for a long career. Even now, one feels that we are watching a unique performer – a Bjork, a Madonna, a Kate Bush. Her voice is distinctive, strong and characterful and not blessed with the vibrato affectation that so many of today’s young artists aim for, informed by endless X-Factor and Pop Idol style programmes. Her stagecraft is growing along with her confidence. She is hypnotically watchable, working the whole of the stage, dropping down to the front row to meet her fans. She pulls a toy xylophone out to start one of her songs, before the band pick up the instrumentation. The encore of “Loveless” is performed solo with Lorde playing with her own bag of electronic tricks.

The hits delivered – “Tennis Courts”, “Royals”, “Perfect Places”, “The Louvre” were all stunning crowd pleasers. The final “Green Light” was a celebration akin to LCD Soundsystem’s “All My Friends” at Friday’s Ally Pally gig.

We saw Lorde at Glastonbury earlier in the year and it felt like our appetite was being whetted. In some ways, the Ally Pally show was a side step. The staging was simpler. The elevating glass box had gone. It was a more direct show in Somerset as is typical for a festival. The scope to expand the setlist wasn’t wasted at Ally Pally. A very clever cover of Phil Collins’ “In The Air Tonight” (dig that gated reverb) split the crowd. The younger members probably didn’t recognise it, the middle members thought it was the Cadburys’ gorilla advert song and we, as the over fifties, just lapped it up.

She is unique though and should be celebrated as such. Lorde is here for the long haul.