Jazz can be cool. Last week’s Jakob Bro gig at the Pizza Express was icy, long quiet passages of music punctuated by the odd note.

Jazz can be emotional. 2016’s Simin Tander and Tord Gustavsen concert at Milton Court captured the beauty of a combination of Afghan and Scandinavian jazz.

This week’s Nels Cline gig at the Vortex proved it can be a laugh riot too.

It’s a mark of Nels Cline’s qualities as a musician that he can excel in so many different formats. His first album for the venerable Blue Note label, 2016’s “Lovers”, cast him in a larger band playing smoky mood music (read about it here). His 2014 album “Room” with Julian Lage, his guitar compadre this evening contained singular guitar duets and whilst was angular, it also set out the relationship between Lage and Cline. 2010’s Nels Cline Singers’ album “Initiate” captured the more experimental material that his earlier career was built around but in a completely accessible environment and reflects where he has gone with Wilco on songs like “The Art Of Almost” or “Impossible Germany”.

Wilco are on a brief hiatus at the moment. Jeff Tweedy played in London earlier in the year (reviewed here) and the rest of the band are busy with other ventures.

Cline has just released his second album for Blue Note, “Currents, Constellations”. Recorded as a quartet (hence the Nels Cline 4), in some way it is a development of the “Lovers” in keeping with the romantic part of Blue Note’s repertoire. This doesn’t tell the full story though. The album clearly draws on the jazz tradition and in particular the Blue Note glory years.  It swings.

The quartet is an unusual band format. Whilst two guitars, bass and drums are ten a penny in rock’n’roll, the line up is as rare as hen’s teeth in the jazz world.

The over-arching emotion of the evening was a sense of fun though. The musicians encourage each other throughout the gig, shouting out and exchanging smiles, particular between Lage and Cline who stood next to each other, with Telecaster and Jazzmaster respectively in hand. Eye contact was a big part of their interaction, nodding to commence solos, coinciding riffs or crescendos.

The evening started with the two guitarists playing John Abercrombie’s “Memoir” as a tribute to the musician who died in August 2017. It was a sweet melody, almost like “Nature Boy” that concluded with a crash from drummer Rainey that immediately kicked off “Furtive”.

Rainey was a source of fun all night. Having last week watched Joey Baron play a couple of pebbles and previously seen Trilok Gurto play a bucket of water, Rainey’s unusual percussion was a supermarket bag for life containing his sticks which he rattled to introduce another colour to the music. Trust me – it worked. 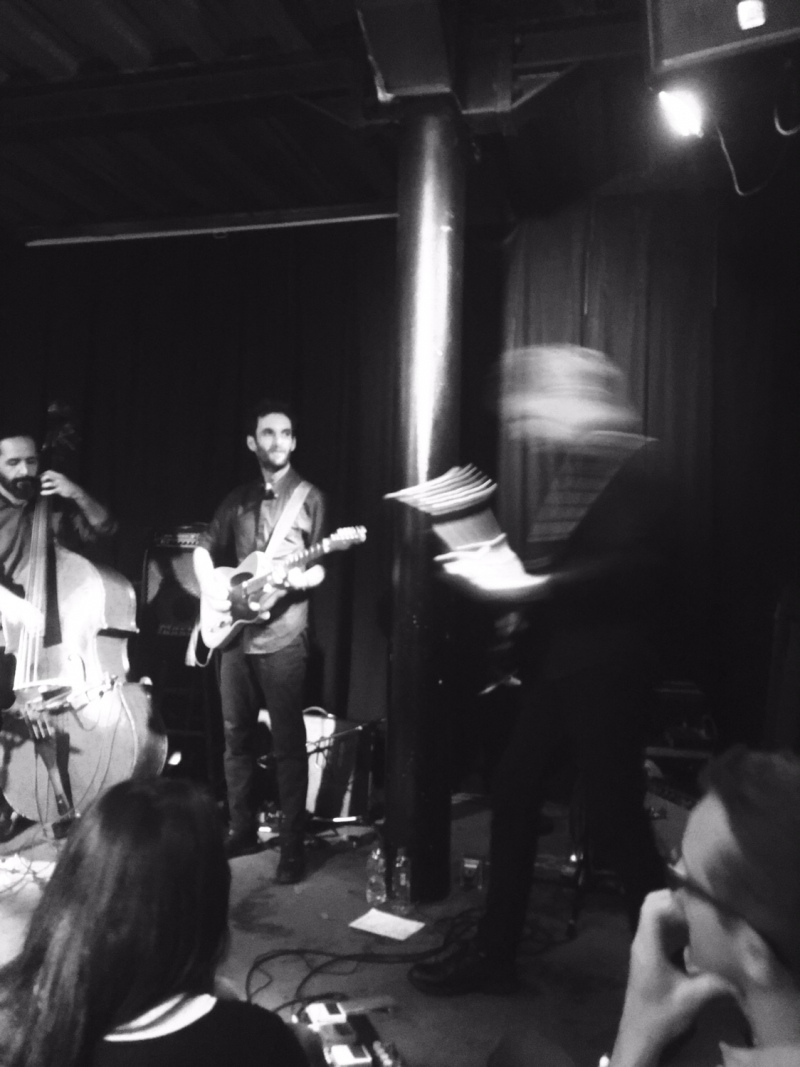 “Furtive” set the upbeat tone for the evening, with Nels rocking band and forth teasing his guitar much as he does for Wilco. The melody lolloped along, a wonky Monk-esque number. “Swing Ghost ’59” and “Imperfect 10” were highlights, both loud and rocking the former erupting into a Hendrix like rhythm.

Other highlights were a gorgeous take on “You Noticed”, a ballad from the “Lovers” album with bass player Jorge Roeder bowing his bass sympathetically and the second set Ralph Towner-inspired opener “As Close As That”, which was taken at a similar cool tempo but with plenty of drama.

The evening concluded with the album’s centrepiece “River Mouth”. Taken in two parts, it started like an ECM meditation, taken slowly and advancing via almost an Indian raga into the emphatic second section. At this point, Lage and Cline were playing like demons, like a jazzed up version of Marquee Moon-era Television. The song just soared, the perfect end to a great gig.

For those familiar with Nels’ typical Wilco set up, you would no doubt have seen him with a constant supply of changing guitars, an effects pedal board the size of a small European country and an adjacent table for other stuff for him to manipulate and abuse his sound with, from a Korg Kaoss pad all the way through to an egg whisk.

For the Vortex gig, he used just one guitar, a bashed-up looking Jazzmaster and a much smaller range of effects pedals. His tone was much more untreated, relatively clean with the variety of sounds coming from the way that he applied his own technique to the guitar, rather than any artificial enhancement. Lage approached his work in the same way, which helped both musicians mesh in a way that often blurred the boundaries between who was playing what at a given point in time.

I managed to catch up with Nels after the gig. He was delighted with how it went, confessing that he was surprised to recall that it was his first gig as a bandleader in London, despite the longevity of his career. I suggested that it would be fantastic to bring his Lovers Project to London. Nels commented that it would be a 17 piece band using his own rhythm section with local musicians, an expensive enterprise which would require some financial backing.

And with that, Nels was away to speak to a man about a dog (or a promoter about a Lovers gig hopefully).

A final word on the venue.

The Vortex is a long established N16 institution. Volunteer-run, I’d visited it at its previous home on Stoke Newington Church Street which I visited many moons ago when looking locally. It moved to its current home in Gillett Square in 2005 in a new but basic building and has been prospering since, winning awards and receiving great reviews. It is a model for how local support can allow relatively niche artistic forms to flourish.

Once inside the venue, if you booked early enough then you get a table, quite possibly near the stage. The arrangements are marshalled efficiently and pleasantly by club members armed with clipboards. Whether you are sitting or standing, you’ll be cheek by jowl with your fellow attendees. It has a great atmosphere though, with a knowledgeable crowd who clearly love their music. I’d consider becoming a member if I lived a little bit more locally.