The seventh in a series of posts about the Fall’s Peel Sessions.

2×4 appeared on “The Wonderful and Frightening World of the Fall”, released on 12th October 1984. C.R.E.E.P. and Pat Trip Dispenser formed the C.R.E.E.P. single. Words of Expectations was effectively unreleased but contains Living Too Late.

Britain was a divided country. A landslide victory for Thatcher had given her the mandate to allow her toxic policies to be pushed through. The Greater London Council was abolished, ironic when one considers the conservative desire to devolve Big Government (expect on your doorstep). Norman Fowler began the privatisation of the NHS, a Tory battleground to this day. Labour switched from Foot to Kinnock, in a desperate measure to become more centrist.

And we had an American in our midst.

Ian McGregor was appointed the head of the British coal board.  An old-fashioned union busting bully, he’d dismantled British Steel and had the mining industry in his sights. Nationalised industries were his targets. Roll on twelve months and the violent and divisive miner’s strike would be tearing communities apart.

Laura Sallinger aka Brix had taken a shine to the Fall’s Slate EP. It was a Saturday night, 23 April 1983 to be exact. The Fall were playing Chicago’s Cabaret Metro. Brix and her pal Laura had stumped up the $6 to see the band. She was immediately captivated by the sound – the twin drum attack which reminded her of Adam and the Ants, Stephen Hanley’s pulverising bass. She found the singer odd. “I wouldn’t like to be friends with this guy,” she thought, somewhat ironically given what happened next.

After the gig, she headed to the bar downstairs. Brix literally bumped into Mark, as he carried a couple of beers back to his table. A conversation ensued about Mark’s lyrics, undecipherable to Brix. They headed to a party and back to his motel. In Brix’s brilliant The Rise, The Fall, And The Rise (which I wrote about here), she sums it up in one sentence:

I had found my soulmate

Brix joined the band on the road and within a month, she had moved back to Manchester with MES and her cherry red Gretsch. Give it a few more weeks and they were married and Brix was in the Fall, contributing song ideas and playing live. Brix’s presence was certainly welcomed by Stephen Hanley who commented that she helped MES keep a lid on his volcanic temper.

She was thrilled to travel to Maida Vale to the BBC studios for December’s session. From Chicago to London in less than a year, things were moving apace.

This was fantasy stuff, the point for me where the band and I started our relationship. It was the usual format – four songs.

First up was Pat Trip Dispenser. A song about an American tour promoter called Pat who tried to dispense fake amphetamines, it was not far off of the final form other than Brix’s harmonies would get sweetened when it was eventually recorded. It sounds less full, which serves to emphasise the fantastic job John Leckie did in fleshing out the band’s sound.

2×4 was where it clicked for me. This is where I finally “got” the Fall at the time. It was a “proper” song, which probably helped – it had development of themes, sections, chord changes, harmonies. This was conceivably commercial. I was sweet sixteen years old and this was accessible.

Words of Expectation was a work in progress. Sounding like a jam, it contains elements of Living Too Late, which would appear in 1986 when Bend Sinister was released. It is a jam is relatively unappealing, more interest in what it would become.

The closing C.R.E.E.P. isn’t a signpost of what would be around the corner. It was a giant technicolour billboard, stood next to a Hollywood freeway. Genuinely catchy, danceable as if the B-52s had come from Manchester. We are using adjectives that we’ve never associated with the band before – sparkly, charming, pretty. Brix especially thought it would be a radio hit. She was almost right to a point – it spent two weeks in the charts, hitting the heady heights of 91. It was a progression of sorts. The previous single, Oh Brother, had peaked at 93 and only spent one week in the charts. This was progress.

Listening back now, the session pales somewhat against the versions ultimately recorded. This is less to do with any issues of musicianship and more so the way that Leckie captured the new sound later in the year at Focus Studios. 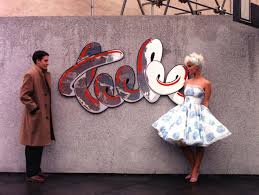 Things were changing though. Channel 4’s The Tube introduced the potential for bands to appear on TV at a decent peak time, early on a Friday night, rather than be tucked away around midnight on the Old Grey Whistle Test. It’s 25 November 1983 and the Fall have been chosen. It was a Marc Bolan special and John Peel had agreed to appear on the programme, conditional upon the Fall joining him.

This clip perfectly catches the band in transition. Smile (performed at the previous Peel session) featured the assault and battery of the twin drum attack from Karl Burns and Paul Hanley, violent and unrelenting. This is old school Fall brought to its logical conclusion.

It’s a pivot point, as Steve Hanley locks in the rockabilly 2×4 groove and Brix steps forward.

The TV appearance successfully completed, the band cross the road to the Rose and Crown pub and Peel buys them a congratulatory beer. They’ve never met before. Peel is shy and the band talk his ears off.

Things were never going to be quite the same again.