There has been much talk in this post-Netflix streaming era that we are in the midst of a golden era for television. This may be true. 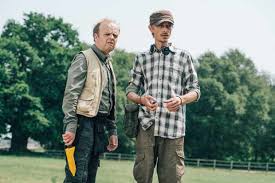 More pertinently it does feel like we are living through an age of intelligent and often gently bittersweet television comedy. The Detectorists is sadly finished but was an incredibly accurate observation of largely the male ability to focus on trivia to the exclusion of the most important things in their lives until it is imperative to do so. The Irish-Anglo Young Offenders follows the marvellous movies about two late teenage boys struggling with leaving school, relationships and grief, the two main characters have each lost a parent. Two Doors Down is a domestic comedy set around an estate of semi-detached houses in Scotland and at its centre a put-upon housewife, beautifully played by Arabella Weir. Derry Girls is capturing what life was like for teenagers in the 90s during the troubles in Derry. And now Mum is back for a third series.

Mum draws upon many of the same strands. Grief forms a significant part. The titular character Cathy (played by Lesley Manville) has lost her husband at an unexpectedly early age and her twenty-something but the child-like son has lost his father. It is very much a situation comedy, the situation stretching the limited distance from the end of the back garden to the kerb on the opposite side of the street. The camera has never strayed from the confines of this small area and as a result, it focuses on the seasonally derived minutiae of domestic life.

The rest of her family at first appear to be nowhere near as fully rounded. But slowly and one action at a time, they reveal a more human side – her son Jason’s articulating his reluctance to move out of the family home for fear he’ll lose contact with the memory of his dead father, the partner of Cathy’s brother pointing out a dropped stitch.

The most human and loveable of the characters is her father in law Reg, played by Karl Johnson.  Initially, your take on him is an elderly curmudgeon who bemoans that it isn’t 1952 anymore but little by little, he shows himself to be a loving father and husband. There’s a marvellous scene when he is trying to find something vaguely listenable on a “Now” type CD and after grimacing through a number of selections, he lands on Cyndi Lauper’s “Girls Just Want To Have Fun”. The hips move a little and he walks back slowly to his sleeping wife in the corner and tucks a lock of her hair behind her ear. Immediately he is transported back to town hall dances and fish and chip suppers. It is beautiful television. Writer Stefan Golaszewski has created something that transcends the boundaries of comedy and drama, in much the same way Detectorists does.

Each episode of Mum is centred on a particular day, normally two or three months beyond the previous episode to allow the arc of the story to develop. We get a vignette to set the scene and then we are into the theme tune.

I didn’t know what it was at first. I started absent-mindedly singing it myself (“I’ve got a ticket for the long way round“) and then noticed my teenage daughter also joining in. I thought “that’s strange”. She hasn’t been watching the programme with us and yet she can sing the verse and chorus, word and melody perfect. I checked the Wikipedia entry for “Mum” to find out what the song was called and that set off a connection across generations.

There are two versions of the song that are played. The second runs over the closing credits and it is a fuller arrangement of the initial number which has a country folk feel and is largely acapella, save for some clapping as an accompaniment. Wikipedia reveals the song to be “Cups” by Lulu and the Lampshades (who now are called Landshapes), who have released a couple of albums on Simon Raymonde’s Bella Union label (read about his recent Lost Horizons project here). The title didn’t make sense to me though as the title didn’t crop up, although the chorus was perfect for a comedy show dealing with grief:

You’re gonna miss me by my hair

So I looked up the song on Youtube and it revealed how music works across the generations. It transpires that the song was originally popularised by the Carter Family. The Carter Family were the foundations on which much of the current Bluegrass and American Country repertoire was built upon. Travelling the US from the 1930’s onwards, A.P, Carter, his wife Sara and his sister-in-law Maybelle drew upon the handed down folk traditions and started an unexpected Mum related musical train of events.

I first came across a note that “You’re Gonna Miss Me” was recorded in 1931, although there’s a decent chance that it had existed before then in the southern states of the US. Re-recorded again in the 30s by Charlie Monroe and J.E. Mainer, the song entered the popular folk repertoire.

The second video on the Youtube playlist was of actress Anna Kendrick being interviewed on the Letterman show. After a brief chat, Kendrick brings out a plastic cup and starts the hypnotic rubbing your tummy and patting your head routine.

Series 3 is starting soon on BBC2 and I’m sure the Cups song will be back. We’ll see where Michael and Cathy have picked up. It will be gentle, beautiful and just what we need.