It’s the day after Glastonbury. Whilst packing boxes for our impending house move, I’ve seen a certain narrative taking over social media around the Festival.

It seems that the weekend has got further under the skin of certain more conservative media sections than usual. In the race for a loss of perspective, I’ve seen Sir David Attenborough described as a virtue signaller, the attendees described as primarily Hooray Henrys and a general impression of fecklessness around contradictions introduced by the one key change – the banning of plastic bottles being sold on site.

So first off – there wasn’t a ban on plastic. You could still bring plastic bottles on to site. I saw many people refilling their existing plastic bottles through their weekend, taking them beyond single-use. There was always going to be plastic used at the festival or left behind. There was going to be less. This was achieved. Sir David was wrong about the festival being “plastic free” but given his contribution to all things environment and education related, we can give him some latitude, can’t we? 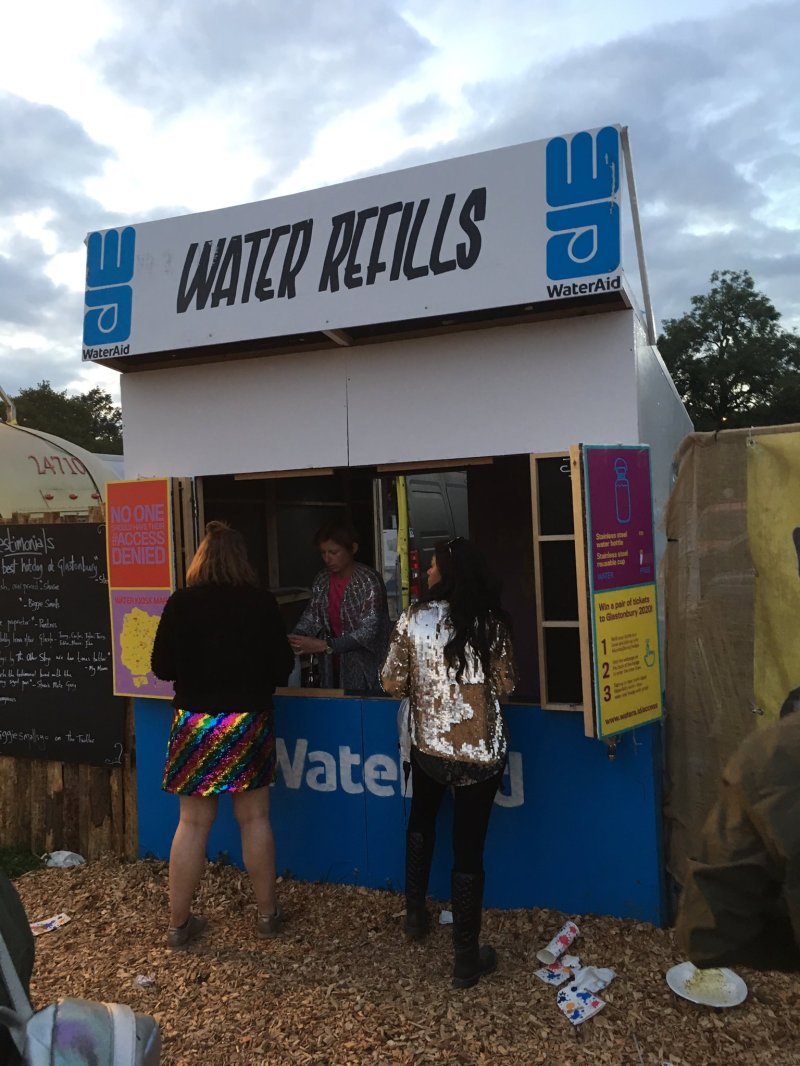 There were queues for the water – not many though. 37 kiosks were sensibly positioned around the site and in our group of approximately 30 people ranging from early teens to mid-fifties, the worse we encountered was just over ten minutes – at the Pyramid Stage, directly after the headliner Stormzy on the hottest weekend of the year. Water was available throughout for drinking with a waiting time of no more than than a couple of minutes, the same as would have been experienced if you’d been buying from a vendor in a van. Showers were stopped from Saturday onwards. This was water conservation, as sensible as a hosepipe ban in the height of summer. This wasn’t a failure but a proportional direct response to the heatwave conditions. It probably has served to inform the organisers of what capacity issues exist. As a first attempt at the policy since it’s introduction, it was a roaring success.

The kiosks were run by the friendliest volunteers you could wish to meet. We are talking 2012 Olympic games makers levels of helpfulness, patience and pragmatism on a challenging weekend. Well done to all those hardy souls available to ensure the smooth running.

The festival isn’t perfect. Tents were left behind on Monday but 0.7%, a marked improvement. It might have been higher on a more inclement weekend but it represents progress. As a double-figures attendee starting in the early nineties, there was a palpable tidiness beyond previous experience. Bins areas were used properly. Cutlery and containers were compostable. There was the odd soul weeing in a bush but nothing like previous years. Mitigation of the festival’s impact is improving. I saw it with my own eyes.

This leads me on to the very existence of the festival, which seems to really annoy certain parts of the media. Firstly we should accept that circa 200,000 people will have a carbon footprint wherever they are. If they weren’t at Glastonbury, they’d be driving cars, consuming food, sitting in air-conditioned offices. So the environmental impact whataboutery that I’ve seen needs to be tempered with this baseline. There is litter on site, petrol will have been consumed getting to Somerset and some people may have been rather more “refreshed” than they should have been. So let’s call this the harm.

I also accept that other countries have more of an environmental impact than the UK. This isn’t a race to the bottom or the time for complacency. We’ll get caught up by China and India in short order if the potential free market deregulation that could follow a populist government being elected. This is the only planet we’ve got. Surely leading by example is the way to go.

The festival organisers recognise the impact. My 14-year-old daughter travelled from London to the site by train. It went like clockwork. Car-free travel to Glastonbury is a possibility. Biofuel powers 10% of the stages. The Green Fields areas are run on solar and wind energy. 500 tonnes of compost are produced from the toilets. Chemicals aren’t used at the notorious long drop toilets. This means that the waste can be dealt with at the local sewage works.

Now let’s focus on the benefits.

On a personal level, I’ve seen the bonds between friends reinforced in our group. We love and respect each other, we watch out for one another, whether it’s sunburn or the moshpit. Our children all have the same attitudes, forged over fifteen years of attending. We are very lucky to be able to afford to come here. We are all from working-class Black Country stock, who’ve pulled our weight in the world and made the most of the breaks. We treat this as a holiday, putting money and annual leave aside. Wives, husbands and kids attend and rub along brilliantly. We’re not hippies and we’re not hoorays. We are normal people who care and have consciences. 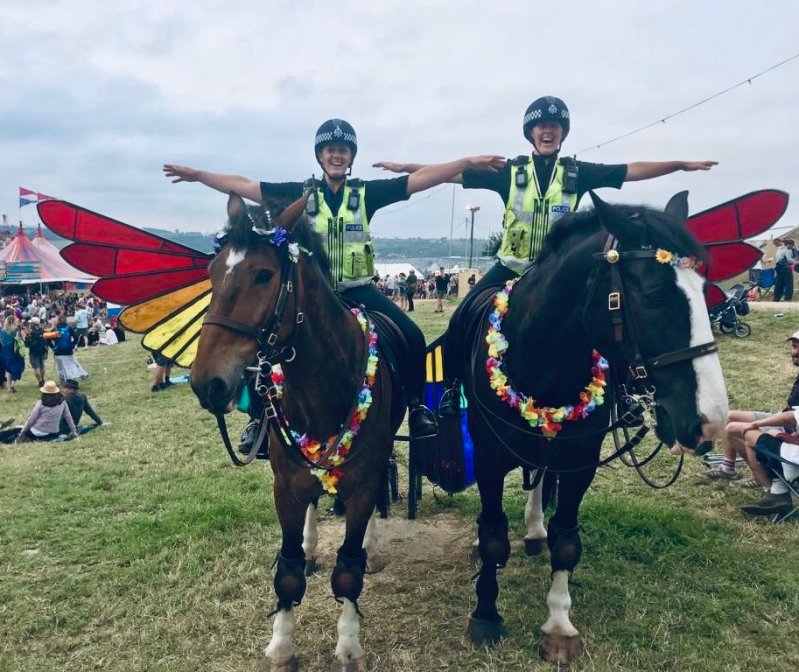 On a wider societal level, much of the previous paragraph is true. Safety is paramount. 96 crimes were reported by Sunday evening with 16 arrests. For a pop-up city with no established social hierarchy or prior neighbourliness, this better than previous years and pretty good going. Not perfect but it’s an environment we are happy for our teenagers to enjoy and explore.

There was a noticeable rise in the profile of black and female artists this year. There was a sense of baton being passed and it was thrilling to see. There is only so long that four white blokes with guitars, bass and drums can sustain the future of music.

I see the BBC get a pasting, especially after the change in over 75 license fees and the salary of talents. Why do they spend money on the Festival? It’s clearly an investment. Their coverage is comprehensive, picking up headliners and up and coming acts. This helps spread the music, something especially vital in the era of streaming with reduced record company budgets for promotion. This all adds to our economy, as music so often has from the Beatles onwards. They do pay for the honour to cover the festival and may have call over some of the roster of the day but in the end, the balance is pretty good when one considers the fifteen plus main stages and all of the other performance spaces too. Take your pick – folk, dance, reggae, world music, jazz (especially jazz), grime, rock, metal – you name it, you could find it.

There was politics. Of course, there was, there always has been. If anyone is shocked to find variations on Loyle Carner’s “I Hate Boris” sentiment then they have clearly not been paying attention to the lack of political engagement with young people. So the idea of another privileged white Etonian running the country doesn’t thrill them? Forgive me not being surprised.

Stormzy and his mum, the morning after the night before
Let’s go back to personal for a second. Loyle Carner and Stormzy love their mums. Can there be a better expression of the kind of values that we want to see spread through society than this? So in the uninformed rush to paint this as some drug and sex-fuelled hellhole, a 21st middle class entitled Sodom and Gomorrah, let us reflect on two of the biggest stars declaring their love for their mums. And what’s more, they aren’t afraid to publicly express that love.

I can’t make people who hate the values that Glastonbury embraces understand what joy the festival can bring. It’s difficult to do that if you are sat in your armchair, reading the Daily Mail, screaming at the latest grime innovator on BBC2, refreshing your alt-right Twitter feed whilst you frantically opine on how it encapsulates all society’s ills. And by the way, if you are going to tweet images of the Pyramid stage the day afterwards, do me a favour and get the year right. We do remember these things.

I can give you a view from the ground though. The sun machine came down and we did have a party. Trust me though – the positivity will reverberate long after the F5 keys have been worn out.