I last saw Lloyd Cole back in Liverpool at the Empire Theatre on the “Mainstream” tour. According to my trusted Setlist.Fm website, it was on 17 November 1987. If I scroll through to his gigs for the next year, he played his farewell gigs with the Commotions at Wembley Arena. Let’s just reflect on that – Wembley Arena. It gives an indication as to how successful the Commotions were in the late 80s.

So what happened next? Lloyd headed to America and made two fantastic LPs. “Lloyd Cole” in 1990 was just raw New York rock’n’roll with him fronting a band that included the brilliant guitarist Robert Quine and Fred Maher, both fresh from Lou Reed’s band. Now Lloyd has taken some flack through the years as a Lou wannabe. Neither Quine nor Maher are anyone’s mugs and to me it reinforced that Cole was a respectable talent in his own right.

Here’s Lloyd in full New York mode with long hair and aviators to boot. The clip was filmed at the Wakefield Opera House of all places. Quine is the bald guy playing the Strat. Quine was quite the figure in the Big Apple. He had made some much bootlegged live recordings of the Velvet Underground. He ended up working in a movie memorabilia store with Tom Verlaine and Richard Hell of Television before playing guitar for Lou Reed, Tom Waits and Brian Eno. He died tragically of a heroin induced suicide in 2001. His wife Alice had died the year before of an unexpected heart attack. His friends tried to rally around him and he said he was getting better – he’d got the crying down from four hours to two hours per day. It was no good though – Quine had already gone.

Eighteen months later, he released the follow up, “Don’t Get Weird On Me Babe”. It was a magnificent LP.  The first side was widescreen American epics, in the vein of Jimmy Webb, Bert Bacharach and Glen Campbell. Orchestral and sprawling, they were the kind of songs that would have sounded not out of place in early seventies Hollywood. The second side was more of the small group format, revisiting the debut solo LP. Needless to say, the British public was nowhere near in the mood for this type of stuff and it stiffed in the UK. Whereas the Commotions were contemporaries of the likes of the Smiths and built upon a similar fanbase, by 1991 the world had turned. The big alternative LPs of the year (“Nevermind”, “Screamadelica”, “Blue Lines”) were all miles away from where Lloyd was, both geographically (by now Cole was married and living in the USA) and sonically.

Here’s “There For Her” from the second LP. The performance is from an Irish music show in 1991. It is a little off vocally in places but it gives a good feel for the sonic direction that Lloyd was heading. There are gorgeous lush strings and horns with an aching slide guitar. Lloyd was stretching himself, in terms of the length of the songs and their structure.

I lost touch with Lloyd at this point. The follow up LPs didn’t quite have the spark that his first two solo LPs had. If anything they were a bit too Lloyd like. I rather enjoyed the fact that those initial LPs had flipped expectations around. Cole then got into record company difficulties with records being shelved by Polygram. In the meantime, he started playing live with local musicians and tried different ensembles.

In recent years I’ve been catching up though. One of the main reasons is his online presence. He mans his own website and Facebook page and seems to have control over his back catalogue. He seems to be a man who is comfortable with his career and is doing what he wants to do. He has even got into building and repairing analogue synthesisers and has recently released a rather excellent electronic LP!

His latest tour is revisiting the Commotions back catalogue. My other half N was a fan back in the day of the first LP with his band “Rattlesnakes”. The London venue was the beautiful Union Chapel, a church in Islington just down the road from where we live.

The building is a working congregational church, dating from the 1870s. Designed by the church architect James Cubitt, he specialised in literally broad churches. It was scheduled for demolition in the 80s but saved thanks to much campaigning. It now frequently crops up in the top London gig venue lists. Through the years, I’ve seen some great shows there – Earth, Emeralds, Bill Callahan, Thurston Moore, Jeff Tweedy amongst others.

Cole has declared 2016 his “retrospective” year. As noted on his website here, he is working on a box set of the New York years whilst touring his early music and recording a new LP.

He was true to his word, with no song more recent that 20 years old. What was apparent, aside from the already established excellence of the songs, was how many benefitted from a stripped back format. With just Lloyd and his son William for the second set on acoustic guitars, many songs had room to breathe shorn of their glossy 80s production sheen. In particular, the songs from Lloyd’s troublesome second LP, “Easy Pieces” were a revelation. It was apparent that if he had found a more sympathetic producer, the upward trajectory from “Rattlesnakes” in quality terms could have been maintained. Both “Perfect Blue” and “Cut Me Down” were intimate and engaging, something their Fairlight driven recorded versions could never have been accused of.

The hits weren’t treated with reverence. “Rattlesnakes” was taken to pieces and put back together, sounding like Lloyd’s favourite Arthur Lee records. “Brand New Friend” had a spring its step but I still cringe at the “Jane was in her turtleneck, I was much happier then” line.

Between the songs, Lloyd was in chatty form discussing ageing, his hair and acknowledging that some of his older songs may have been a little up themselves.He prefaced “Downtown” with a comment that if, like many of his peers, he was to write his memoirs, this particular song would sit in a chapter entitled “Young Persons Guide To Darkness”.

There was an interesting cover thrown in too. The pre and post show PA music was Bowie and Prince, and after “Loveless”, Cole sang “Sometimes It Snows In April”, the final song on Prince’s “Parade” album and arguably his prettiest ballad. Whilst the original was played on the piano, Cole’s guitar version worked well.

After the interval, William’s second guitar added a richness and depth to the sound. He’s a skilled player and didn’t just play the original guitar parts through rote. Continuing the Prince referencing, he even threw in part of “I Would Never Take The Place of Your Man” into the end of “Like Lovers Do”.

The 25 song set fled by and was hugely enjoyed by the packed venue.

A couple of words of praise – it almost goes without saying that the Chapel was on fine form. Excellent sight lines, beautifully lit, great sound, top peppermint tea in old style mugs – it really is a great venue. If we could just remember to bring an inflatable cushion to deal with the wooden pews, Nirvana would have been achieved.

The second shout out goes to the merchandise stand – it was empty, except  for one item. The only thing for sale was a £20 token to collect a double limited (120 copies) pressing of a live CD of the evening’s performance to take home with you. 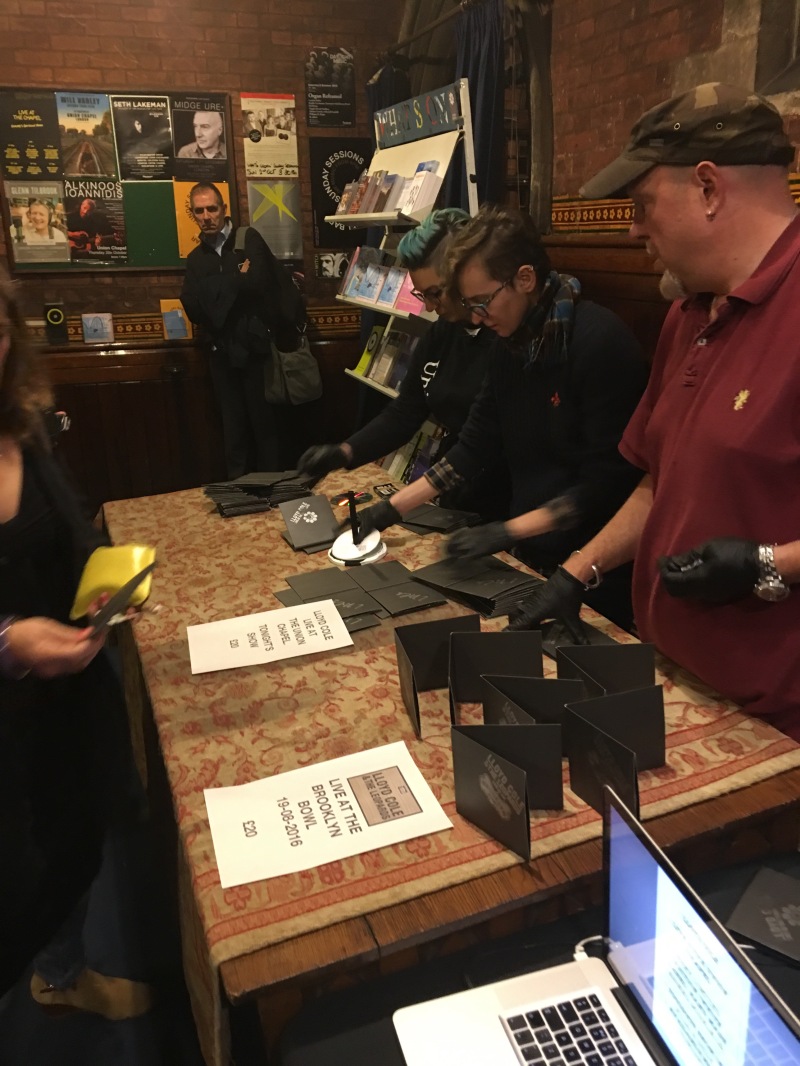 Liveherenow had a bank of CD burners in the corner. They offer their services at a few concerts now (OMD and the Orb for example). It is a great top up for the band. It generated £2400 in takings on top of what was paid on the door.

What a delight! We got in the car, but the CD in the stereo and drive home listening to an immaculate recording of the gig we had been at 20 minutes earlier – and the sleeve was signed by Lloyd. If only other bands had the foresight to provide this kind of offering. Admittedly an acoustic gig is easier to capture but it shouldn’t be beyond the wit of man. Even offering a download token as Bruce Springsteen does would be a deliverable goodie that I imagine would have a decent take up rate.

Lloyd commented during the gig that he felt like he was the first artist to develop his own website and grasp the power of the internet. He continues to adapt and on last night’s evidence, prosper.