This was always going to be a little special.

I was meeting up with a couple of old mates at the home of British jazz to see what was essentially David Bowie’s band leader for the “Blackstar” album perform up close and personal. 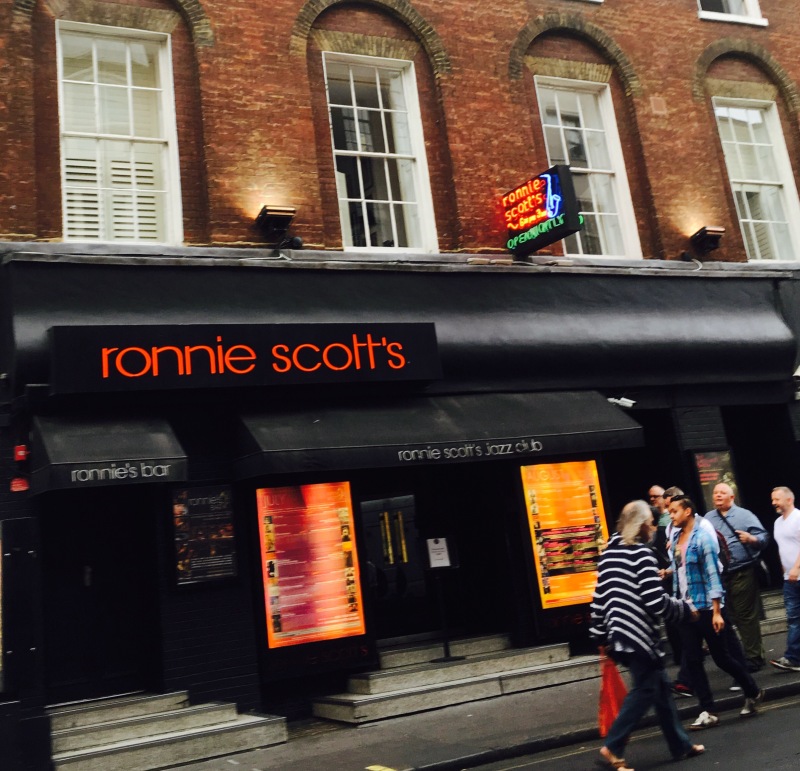 McCaslin had played on Bowie’s “Sue (Or Is It a Season of Crime)” single and Bowie had sensibly identified him as man to build the musical vehicle for what was to be his final album. As a sax player himself, Bowie recognised a good horn man, having previously brought David Sanborn into the “Young Americans” sessions, the Borneo Horns into his pop-era “Let’s Dance/Tonight” albums and Don Weller on “Absolute Beginners”. The sax had consistently been a feature of DB’s music, regardless of who was playing it.

McCaslin brought something a little more beyond standard brass support. He introduced the electronics that have featured on Donny’s last two albums, “Fast Future” (2015) and “Beyond Now” (2016). The dynamics that both Donny’s albums and “Blackstar” are at one with a common direction in contemporary jazz – less so the European ECM school of music and more so albums such as a recent favourite, Antonio Sanchez’s “Meridian Suite” (which I wrote about here). The music is exciting and unpredictable but with a perceptible rock’n’roll feel to it too.

The line up at Ronnie’s was a quartet made up of Jason Lindner on keys and electronics (another Blackstar alumni) and the rhythm section of Jonathan Maron on bass and Nate Wood on drums.

Bowie cast a long but positive shadow over the evening. McCaslin was wearing a “Blackstar” t-shirt, which he commented he hadn’t worn since the Grammys, and then added that the designer Jonathan Barnbrook was in the house. Barnbrook had contributed to Bowie’s comeback artwork and gave a cheery wave. As I left, he was still happily signing “Blackstar” and “No Plan” sleeves for the hoards of Bowie fans in the house.

Donny was clearly touched and thrilled to have worked with DB and the main set contained mournful covers of “Lazarus” and “Warszawa”, the first track on the instrumental half of “Low” and Bowie’s first primary indication that he was interested in moving beyond rock, pop and soul into uncharted instrumental territories. It felt fitting therefore to close the circle and the stateliness of the band’s treatment of the song was a fitting requiem.

The rest of the set was a mixture of the new and old. He dug out “Fast Future” from the 2015 LP of the same name, to close the second set and opened up with “Shake Loose” from his most recent LP. What was apparent on both was the imagination and freedom that the electronic treatments brought. Not only did Lindner dive into some subterranean sounds, Donny himself multi tracked his tenor saxophone. Plumbing the depths of the instruments tone, he crouched lower and lower, almost at times breaking into a Chuck Berry duck walk.

This was particularly apparent on “Beast”, a new track that he said he had written after being ashamed at the misogynistic tone of the American Presidential campaign. No prizes for guessing who the eponymous beast is and Donny used the single note deep honks as a metaphor for the Donald’s ugly soundbites and hateful proclamations.

The band all contributed to the thrilling evening. Lindner’s playing was often spectacular and picked up the Bowie theme whether it was atonal Mike Garson soloing on “Beast” or Eno-like knob twiddling on “Bright Abyss”.

The rhythm section were locked in, Maron rock solid with Wood providing percussion fireworks, working the kit, firing off the edge of cymbals with some extravagant stick play too. Quite often a dub sensibility emerged in the combination of the drum and bass combined with the electronically enhanced sax and keyboards.

Occasionally things got deliberately out of hand only to be resolved back to McCaslin’s rich melodies. It was out there but totally approachable. I always marvel at how much more engaging jazz is in a live environment and this evening just demonstrated that. What was constantly apparent was McCaslin’s underlying gift for melody. Take “Blackstar” (the song) for instance – the beautiful twisting turning section that starts with “something happened on the day he dies” sounds instantly recognisable when you absorb McCaslin’s other tunes. He has an ability to pluck the simple beauty from chaos.

The circle was squared with the encore, a raucous run through Bowie’s “Look Back In Anger”. At one point, Donny stuffed the microphone in his back pocket and wandered over to Jason Lindner. They both defiantly bellowed the title of the song at the appropriate moment, feeling like they were trying to summon up DB’s spirit.

After the gig Donny generously and graciously mingled with the crowd, signing autographs and posing for selfies, along with his bandmates. Whilst we waited we mused on the evening’s music and in particular, where Bowie fitted in. My friend Mark suggested that “Blackstar” was a David Bowie album played by jazz musicians, rather than vice versa. One could well imagine Bowie walking into the Village Vanguard in Manhattan a few years ago, seeing Donny’s band and saying “THAT’S who I want to work with.” We also mused then one when last Bowie personally hand picked en mass a whole team of existing collective musicians to work with. We found our way back to “Young Americans”, David Sanborn and the sax connection again.

We took the opportunity to get our CDs signed and thank the band for the evening’s performance. Mark mentioned to Donny that it was such a shame that the band and Bowie never got to play live in public together. Donny revealed that there were plans afoot for late January 2016 for Bowie to join them unannounced at a Vanguard residency.

We all know tragically why that didn’t happen. Listening to the band now, one can conjure up what it would have sounded like.

Here’s a taster of the band, albeit with a different rhythm section from the NPR Tiny Desk Concert series: