It transpires that I was ahead of the curve. Well, there’s a first time for everything.

Two years after my trip of a lifetime to Japan in 2017, all manner of Japanese music and culture is bubbling to the surface. It’s sakura time in the UK and my other half has a matching handbag. Every time I go into the old Foyles book shop in London, there’s a new display of featured Japanese literature. The new Emperor is about to ascend in Japan for the start of the Reiwa era, the first time that the period name has been taken from Japanese rather than Chinese classical literature. The vogue for Japanese minimalism and decluttering your home seems to have superseded hygge as the go-to thing for the stresses and strains of living in the UK. Japan seems omnipresent.

There’s a number of record labels that are leading the way. British labels Barely Breaking Even (BBE) and Jazzman have both released excellent compilations of Japanese jazz in the last twelve months. BBE have even followed this up with some individual reissues of albums by featured artists. Mule Musiq are on to the third volume in a year of their Midnight in Tokyo series. Whilst the label is Japanese, they’ve secured European distribution via the wonderful guys at Kompakt in Cologne. The compilations capture the funky poppier end of the 80s scene, all rolled up pastel coloured sleeves, chrome and Mazda RX5’s.

And finally, there’s good old Light In The Attic. The Seattle based reissue label issued a brilliant compilation of 70s Japanese folk, Even A Tree Can Shed Tears a couple of years ago. In 2018, it started the first pressing outside of Japan of a number of Haruomi Hosono LPs, the first few I wrote about here. Always immaculately presented with copious sleeve notes, this year has brought a selection of Japanese ambient music, Kankyo Ongaku.

The first sign that this is going to be something worth listening to is the involvement of Spencer Doran. Spencer is one-half of Visible Cloaks whose Reassemblage album was one of my soundtracks for a glorious three week trip around Japan in 2017. Rhythmically and melodically beautiful, it was the perfect album for staring out of the window of the Shinkansen. It’s blissful stuff. Doran has already got his own label doing reissues, Empire of Signs.

But how did this Japanese version of ambient music become a thing?

If we time travel back to 1975, Brian Eno is lying in a hospital bed after being knocked down by a London cab. A fuller explanation can be found here but Eno was about to “invent” ambient music. Whilst in retrospect, the musical genes already existed in the wider world, Eno’s great step was to name it as a genre.

The proof of the wider genesis of music that could rightly be described as ambient is apparent in Kangyo Ongaku. Five years beyond Eno and his discreet music, Japan’s 80s economic boom has helped trigger investment in the arts and in particular, the use of background or environmental music in Tokyo combined with the likes of Muji, Sanyo and Seiko looking for some soundtracks for their adverts.

The reissue captures a bit of both. It transpires that this sort of music has always had a place in Japanese life, especially around the use of water features in garden design and temple bells. So it wasn’t a great stretch when in 1975, a series of concerts kickstarted the Kangyo Ongaku movement in Tokyo. As for Eno, Erik Satie was a common source of influence for both Eno and the Japanese musicians. The French musician, who died in 1925, composed his series of 3 Gymnopedies. The pieces were short piano pieces that were gentle but did contain the odd little bits of dissonance. When one listens to the box set, Satie’s influence becomes more evident. Indeed, Japanese electronic giants JVC commissioned new recordings of Satie’s work in 1984 for their Music Interiors series.

A good starting point and a personal favourite is Blink by Hiroshi Yoshimura. Music for Nine Post Cards was Doran’s first reissue and Blink is incredibly accessible. With a slow electronic keyboard motif similar to Eno’s 1/1, it is truly environmental music, the literal translation of Kangyo Ongaku. There’s a little blue note in the melody that makes it more human and soulful, more engaging.

The opening track Still Space by Satoshi Ashikawa is cut from a similar cloth and is consciously aimed at dealing with the contrast between the daily grind of Tokyo life and the importance of nature in Japanese culture. Ashikawa ran a book and record shop called Art Vivant in the Ikebukueu area of Tokyo, which acted as a hub for the scene. It was reported as the first shop in Japan to stock Eno’s Music For Airports and feels like it could be the fountainhead. Tragically, Ashikawa died when he was just 30 years old in a car accident. Before his passing, he launched the Sound Process label which originally released the Nine Post Cards label.

Not all of the music is gentle piano and keyboard pieces. Ear Dreamin’ by Yoshiaki Ochi released in 1983 is more rhythmic. Imagine some of the interlude pieces that were used on Japan’s (the band) Oil on Canvas live album. Toshi Tsuchitori’s Ishiura is played on sanukaito stones and is more percussive. The stones themselves date from the Paleolithic period and are often used in Japan as doorbells.

The artists on board aren’t always unknown to the west. Yellow Magic Orchestra and 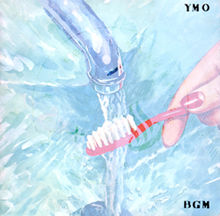 their alumni contribute three tracks. YMO’s contribution is Loom from their 1981 album. It was co-written by and features their computer programmer Hideki Matsutake, effectively their fourth member who rarely took the limelight. Not surprisingly, we get Dolphins by Ryuichi Sakamoto. Sakamoto continues to produce work that is of one with this style of music, either via his collaboration with soundscape artists and Alva Noto or his solo material. We get a slice of Haruomi Hosono too, with his track Original BGM. In some ways, this signified the Kankyo Ongaku’s movement arriving in mainstream Japanese life as the piece was commissioned by the purveyor of all things storage related Muji to play in their stores as muzak. It definitely would have beaten the dodgy cover versions of hits of the day that you would have heard in a British chain store around the same time.

The use of music in advertising crops up with Seiko 3. Just over a minute long, Yasuaki Shimizu was a tiny vignette used in 1987 to help flog watches. In fact, one of the beauties of the compilation is the relative brevity of the tracks, if you don’t like one particular piece, another will be along in short order. For instance, I haven’t quite taken to the plinking piano of Masahiro Sugaya but his track Umi No Sunatsubu is similarly short.

We get refugees from the Japanese rock and roll scene too, such as Fumio Miyashita. Miyashita was a member of the Far Out band who released some very approachable Floyd-like albums in the early 70s. His track, See the Light, has a beautiful stillness to it, incredibly meditative.

The box set features images of the Iwasaki Art Museum in Kagoshima. The museum is set

in the ground of a hotel and designed by Fumiko Maki. The idea of art in a hotel environment isn’t unusual in Japan. We visited the art islands of Naoshima and Teshima on our trip and enjoyed the architecture of Tadao Ando. This was sponsored by the Benesse corporation and shows again the link between the corporate and cultural in Japan. The architect Maki was also the designer of the Spiral building in Tokyo, which is an arts hub that was particularly central to the Environmental Music scene. One of the pieces on the album, Glass Chattering by Yoshio Ojima, was recorded for a Music For Spiral and is still being used in the building.

If you are thinking of purchasing the album, my top tip would be to go for the CD box set which is housed in a 7″ sleeve. The rationale is as follows: Light In The Attic haven’t secured digital rights for all of the tracks. Hence, the LP doesn’t come with a download code and the download purchase and streaming option are limited to ten tracks. If I had my time again, I’d have bought the spinning silver discs version rather than the gorgeous but somewhat limiting 12″ LP version so that I could burn the CDs and get those extra tracks to carry around with me.

It’s quite an investments so I’d recommend streaming the ten tracks online via Spotify or Tidal and if they take your fancy, then dive in. The water’s cool and blue.

The Writing and the Art all in one place

The Writing and the Art all in one place